Advance booking is required to access the visit of your choice and must be made the day before your arrival at the latest !     How to do
How to pay online

This open-air area, built by Dr BLOT, is a reconstruction of different monuments erected by Humans during the period called Protohistory (2800 BC until metal age).

With the help of information panels, you will observe these monuments as well as some of the rituals of that period such as burial and cremation.

You can access the megalithic park free of charge before or after the guided-tour of the Caves of Sare.
The explanations are available in 4 languages. 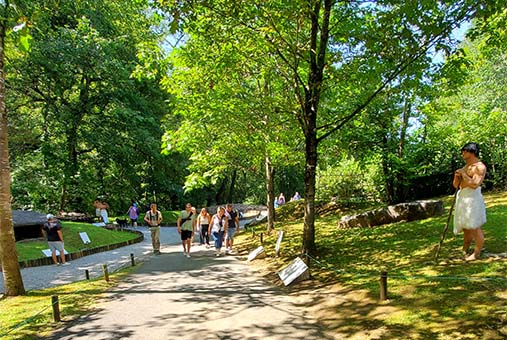 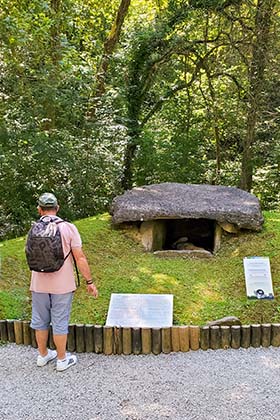 We would like to gratefully thank Dr JACQUES BLOT, archaeologist in the Basque Country, whose experience and advices made it possible to realize these protohistorical monuments.

Though humans practised the first funerary rituals about 100.000 years ago, they have only recently been building monuments outside.

The first monuments in the Basque Country were built at Neolithic Age (4000 to 2500 BC), then at Metal Age :

The body was buried, or more precisely laid in a megalithic monument (mega-lithic = huge-stone) from the Neolithic to the end of the 4th millennium. This ritual lasted until Copper Age and very progressively disappeared at around late Bronze Age.

"True" dolmens, genuine megaliths, can be distinguished from chamber tomb as they have smaller dimensions. These monuments were erected in plains or mountain flanks, most often at moderate altitudes (300m to 400m), which corresponded to easy to reach grazing pastures which were starting to be conquered by an agropastoral population. 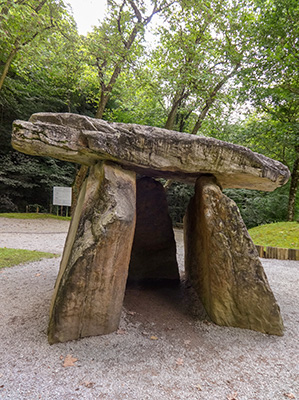 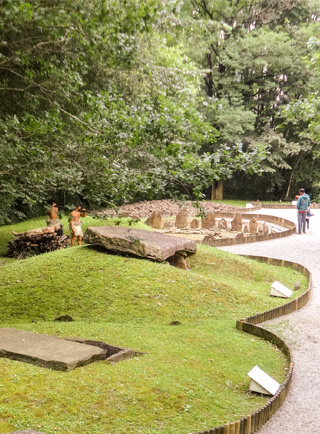 Cremation rituals, the next step at Metal Age :

The body was burnt and some remaining calcined parts only were symbolically taken and deposited at the centre of new structures of three known kinds (which are a variation of the same ritual) :

They can be observed at a higher altitude than that of the preceding monuments (1.000m to1.500m) in mountain pasture (passes / crest lines), probably due to the growing needs of larger herds.

Two major funerary rituals followed one another: burial and cremation.
Prehistoric humans have used the Caves of Sare for several millenniums until about 10.000 BC. At that time, humans were nomads, hunters and gatherers. After the climate changed, humans started developing agriculture and more specifically animal husbandry. They also started settling down, this period is called Neolithic (about 2800 BC).
At this period, a new funerary ritual appeared: the dead were laid out in monuments, sometimes very imposing ones, such as dolmens.
During the following two millenniums before our era, humans devoted themselves to copper, bronze and finally iron metallurgy. This period is defined as Metal Age. Funerary rituals changed at that time: corpses were cremated and other kinds of monuments were created (stone circles, tumuli, etc.).

Cremation rituals started relatively early, as a case is known to have occurred in the Basque Country at Copper Age, that is to say as early as the 3rd millennium BC. This ritual was performed throughout Bronze Age (when burial and cremation coexisted for a moment) and Iron Age. It can however not be excluded that, as excavation works and carbon-14 dating showed it, protohistoric rituals were performed in the Basque Country until historic times (12th, 14th century of this era).

The cremation of corpses on a pyre was more or less complete, until ash reduction was achieved. A handful of ash was then taken (it sometimes contained some rare cremated bone fragments together with charcoal) and placed at the centre of the monument, the location of which was chosen to be near the pyre. Offerings were very rare (ceramic* fragments, small lithic** pieces, round pebbles). The small amount of offerings, or the lack of them, coexists with the very special care taken to build these structures, underlines the symbolic aspect of such funerary monuments that should be called cenotaph*** rather than grave.
Unlike dolmens, they seem to have been dedicated to one single person.

Remember that 3 kinds of monuments exist: the Tumulus-Baratze (or tumulus-cromlech), the simple tumulus, and the stone circle: baratze (or cromlech). The criteria upon which a monument was chosen rather than another one remain unknown. All three monuments coexist within the same necropolis.

*ceramic: pottery made of terra cotta
**lithic: made of stone
***Cenotaph: tomb erected in the memory of a dead person but containing no corpse.

Quite similar to a chamber tomb, a dolmen differs in size with larger stones, especially a bigger capstone. The corpse was introduced into it from the East side where the stone was smaller (or there was no stone at all). These monuments were built in the mountains (as chamber tombs were), had a relatively modest size, and required fewer builders and more limited means than in plains.

The capstone was placed using the ramp of the tumulus, which was sometimes surrounded by a stone circle also called "peristalith".

Two categories can basically be identified: "block" monoliths, parallelepipeds weighing 4 to 6 tonnes, all lying (and looking as if many of them were never standing), and monolithic "stones", most of which are still standing, weighing 1 to 2 tonnes; all exhibit marks because they have been hewn in a definite shape. They can be found in high grazing pastures and along pastoral trails, as well as on crest lines, passes or mountain flanks.
It seems that they played no astronomical role in the Basque Country, but were rather used as pastoral land boundaries to allow an easier and more peaceful use of grazing pastures and watering places. Disputes were also discussed there. As a matter of fact the Basque term for monolith is "muga", which means boundary. The "faceries" of ancient times (agreements between shepherds of different valleys concerning land use) were just the prolongation of older agreements the origin of which is as old as pastoralism itself.
Considering its functions, the tables of Lizuñaga, at the border between Sare and Vera can be regarded as a lying monolith.

The earth mounds reach 10 to 18 metres in diameter and 1 to 2 metres in height; they were always built on sloping lands for better water drainage. They are found in altitude, in sheltered pastures near watering places and gathered by 10, 15 or even 20 units. These mounds are still used as shelters by shepherds. These mounds have a homogeneous structure and it seems that such higher elevations can be attributed a protective role against water run-off, shelters were built at the top and made of tree branches or clods of earth and grass. These temporary shelters were very probably rebuilt every year by transhumant shepherds on the way back from mountain pastures, unlike the permanent habitation of the plains.

There are over 600 habitation mounds in the North of the Basque Country.

It is a tomb containing one or several corpses, and likely to be reused several times. This kind of monuments was erected from the 4th millennium BC to Bronze Age, i.e. during over two millenniums.

LThe huge stones vertically placed in the ground form the burial chamber, its axis is often orientated East-West; the East stone is sometimes missing or less important thus enabling the subsequent introduction of other corpses. The capstone, which was sometimes very heavy, was pulled over the mound made of earth or stones (also called tumulus) using rolls.
The dolmen could represent the limit of a territory of a group or a community where its members only could be buried.

Corpses were sometimes buried together with various offerings, the nature of which shows that our region was opened to different European cultural trends: arms, familiar objects, jewellery made of bones or stones, potteries. Most of the time, these offerings have been stolen by treasure hunters.

There are 27 dolmens out of a total of 110 dolmen chambers in the North of the Basque Country.

They differ from dolmens because of their smaller size and because corpses were deposited by taking off the capstone which was not as heavy as that of dolmens.
Their other characteristics (distribution, altitude, length of use and meaning) seem to be very similar to those of dolmens.

There are about 83 chamber tombs in the North of the Basque Country.

One half of the monument presented here can be seen as it is nowadays, the other half is presented as it was after excavation works.
This type of monument is specifically characterized by a clearly visible stone circle arranged around a mound of earth or stones and measuring 6 to 7 metres in diameter and not over 0,70cm in height.
Though the circle was sometimes used to support the mound, in most cases it seems that it was arranged to delineate an area, symbolically identify a place.
Excavation showed the high level of development of this stone circle, the biggest stones of which only emerged from the ground once the monument was finished. It can be observed how rustic the small container enclosing charcoal at the centre of the circle is. The offerings were very rare and generally deposited on the stones arranged in circle.
It could be considered that the structure of a tumulus-baratze derives from the structure of a dolmen with a reduced burial chamber adapted to the smaller size of the remains deposited after cremation in this new ritual.

There are 61 tumulus-baratze in the North of the Basque Country.

Its functions are identical to those of the tumuli-baratze (or stone circles) with one difference: there is no stone circle. Most tumuli measure 5 to 6 metres in diameter and are made of stones arranged with no obvious order. The central container is usually built in a more rough way than for other types of monuments.

There are 213 simple tumuli in the North of the Basque Country.

Half of the monument is exposed as such, that is to say as it can be seen nowadays, and the other half as it was left after excavation works.
As the tumulus or tumulus-baratze, the baratze (or stone circle) is related to the third kind of cremation ritual. More than elsewhere, a major difference can be noticed between the humble central container and offerings (often no offering at all) and the great care taken to build the structures, be they peripheral or central. More particularly, the architectures built with small stones (most of the time more regular and hewn) could reached a high level of sophistication and aesthetics. The circle of the necropolis of Méatsé, mentioned here, is one example of such a structure.

There are 216 stone circles in the North of the Basque Country.